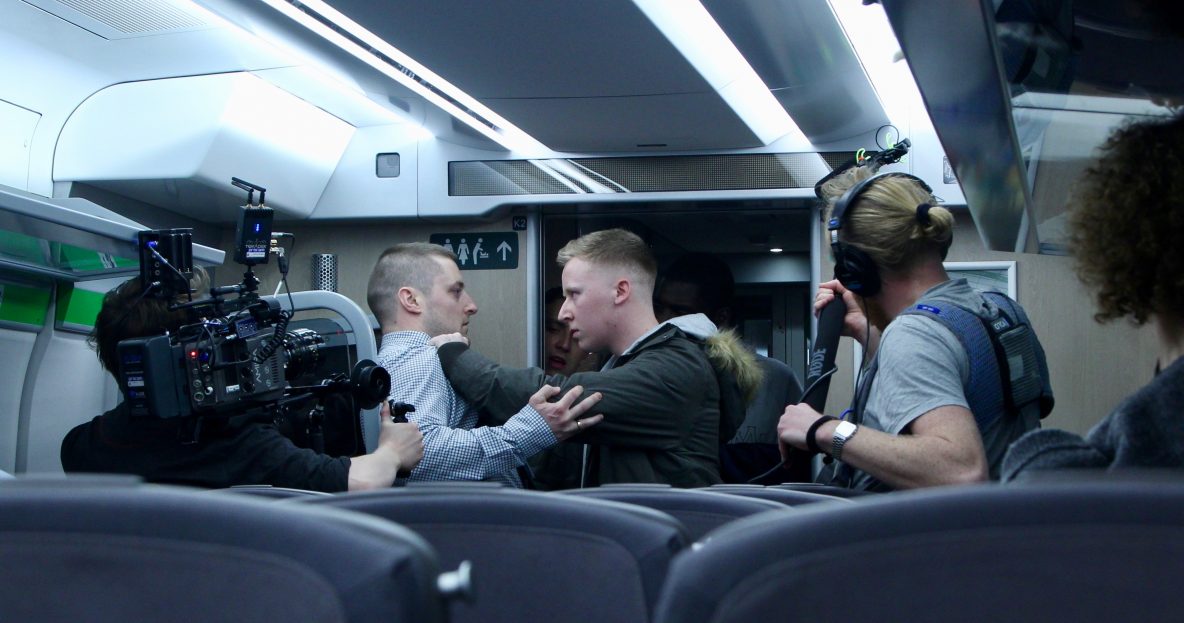 It didn’t look like the North Pole. Despite the chilly spring wind, London’s North Pole wasn’t covered in ice and snow and no polar bears were in sight. Instead, the Worthwhile Training team, including Nicole, Kristen and Ben, found a huge rectangular building housing railroad tracks. We’d come to this central London railway depot (called The North pole) to film our latest training video for Great Western Railway on one of GWR’s gleaming new trains.

This was just the latest stop on our journey with Great Western. Worthwhile Training has been working with the company on a number of projects over the years, including helping to support and train their colleagues in effective conflict management strategies. Key to the learning we provide has been our immersive, drama-based workshops. Our skilled team of actors presents scenarios that encourage staff to explore and practice different approaches to deal with people in conflict situations. These “real-time” experiences have been incredibly valuable, helping individuals gain insight into how their own behaviour impacts situations.

But how could we best export the power of this scenario-based learning out to all GWR employees, not just frontline staff? As we had done memorably in the past, it was agreed that we’d produce a new set of training videos to reflect some of the recent challenges that GWR colleagues have experienced. Once decided, it was all hands on deck! Nicole and Kristen developed scripts to meet key learning objectives and, after a round of auditions expertly overseen by Owen, we found ourselves climbing onto a dark green train at the “North Pole” for the first day of shooting.

Capturing the interaction between a raucous group of young men and a hostess pushing a fully loaded refreshment trolley is challenging in the confined space of a narrow carriage – not to mention documenting a tense standoff with a train manager who is not in the mood to back down. Luckily the technical aspects of the shoot were in the hands of the dedicated and well-prepared team from Firewood Pictures. Will, Asher and the rest of the crew covered all the angles and captured great performances. We all were a little stir-crazy by the end of a long day – traveling on a train to nowhere! – but we were really pleased with the results.

The next morning we found ourselves far from the North Pole, reuniting at the small station of Evesham to shoot a second scenario. This time we were working on the platforms and in the waiting rooms, all wearing hi-vis vests and apologising to travelers when we couldn’t answer their queries about train schedules! Ben, who had focused on directing the group of lads the day before, now stepped in front of the camera to play a man asleep in the waiting room. Nicole and Kristen oversaw the action, making sure that the scene presented multiple opportunities for eventual viewers to analyse a platform staff member’s behaviour and decision-making.

It’s been a challenging but invigorating and successful production process, thanks to the collaborative efforts of all involved!

Once finished, both of these short films will be used in training workshops to stimulate discussion, getting people thinking about why we act as we do, the reasons behind the choices we make and, most importantly, how to be more aware of our surroundings and our own behaviours in order to avoid or manage conflict more effectively. We are excited to see the final results of our labours and move forward with the next stages of the project.